It's creepy and it's kooky. Also kind of spooky.

What a faithful, phenomenal, and painstakingly detailed re-creation this is of the Addams Family Mansion, by artist and IMGURian Nick Dillinger.

All of the photos are Nick's. Go scroll through the entire amazing incredible gallery of images!

The conclusion from a recent paper in the Proceedings of the Royal Society A:

We conclude that facemask use by the public, when used in combination with physical distancing or periods of lock-down, may provide an acceptable way of managing the COVID-19 pandemic and re-opening economic activity. These results are relevant to the developed as well as the developing world, where large numbers of people are resource poor, but fabrication of home-made, effective facemasks is possible. A key message from our analyses to aid the widespread adoption of facemasks would be: ‘my mask protects you, your mask protects me’.

From a Reuters report on the paper:

The research, led by scientists at the Britain’s Cambridge and Greenwich Universities, suggests lockdowns alone will not stop the resurgence of the new SARS-CoV-2 coronavirus, but that even homemade masks can dramatically reduce transmission rates if enough people wear them in public.

“Our analyses support the immediate and universal adoption of face masks by the public,” said Richard Stutt, who co-led the study at Cambridge.

A pair of recent papers used the geographic differences in mask usage in Germany to gauge the effectiveness of masks in preventing the spread of Covid-19. Face Masks Considerably Reduce COVID-19 Cases in Germany:

We use the synthetic control method to analyze the effect of face masks on the spread of Covid-19 in Germany. Our identification approach exploits regional variation in the point in time when face masks became compulsory. Depending on the region we analyse, we find that face masks reduced the cumulative number of registered Covid-19 cases between 2.3% and 13% over a period of 10 days after they became compulsory. Assessing the credibility of the various estimates, we conclude that face masks reduce the daily growth rate of reported infections by around 40%.

And Compulsory face mask policies do not affect community mobility in Germany suggests that people don’t go out more or “feel invincible” when they’re wearing masks:

We use anonymised GPS data from Google’s Location History feature to measure daily mobility in public spaces (groceries and pharmacies, transport hubs and workplaces). We find no evidence that compulsory face mask policies affect community mobility in public spaces in Germany. The evidence provided in this paper makes a crucial contribution to ongoing debates about how to best manage the COVID-19 pandemic.

And these are just from the last few days. Why WHY WHY!!!! are we still talking about this? There’s no credible evidence that wearing a mask is harmful, so at worse it’s harmless. If there’s like a 1-in-10 chance that masks are somewhat helpful — and the growing amount of research suggests that both 1-in-10 and “somewhat helpful” are both understatements — isn’t it worth the tiny bit of effort to wear one and help keep our neighbors safe from potential fucking death? Just in case?

I mean, look at where we are as a country right now. Most of the US is reopening while the number of infections continue to rise. Testing is still not where it needs to be in many areas. Tracing and isolation are mostly not happening. According to epidemiologists, those are the minimum things you need to do to properly contain a pandemic like this. Maybe if you’re Iceland you can pooh pooh the efficacy of masks because you test/trace/isolated to near-perfection, but if you’re going to half-ass it like the US has chosen to do, then wearing masks under semi-lockdown conditions is all we have left! Can we do the bare minimum that is asked of us?

Update: And some anecdotal evidence from Missouri: two hairstylists saw 140 clients while symptomatic last month and it resulted in zero infections. Both the hairstylists and their clients wore masks and took other precautions (staggered appointments, chairs spaced apart).

Update: I deleted a reference to this paper that many epidemiologists et al. have flagged as problematic (see here, here, and here for instance). (via @harrislapiroff)

The Masks Masquerade by Nassim Nicholas Taleb is worth a read.

“Libertarians” (in brackets) are resisting mask wearing on grounds that it constrains their freedom. Yet the entire concept of liberty lies in the Non-Aggression Principle, the equivalent of the Silver Rule: do not harm others; they in turn should not harm you. Even more insulting is the demand by pseudolibertarians that Costco should banned from forcing customers to wear mask — but libertarianism allows you to set the rules on your own property. Costco should be able to force visitors to wear pink shirts and purple glasses if they wished.

Wear a mask. For the Sake of Others.

And finally, obviously, if wearing a mask is not advisable for you — for a genuine medical reason or if it makes you look dangerous to a racist policing system for instance — then you shouldn’t wear one! But the vast majority of us should be able to manage it.

The Verge - All Posts
3 Shares 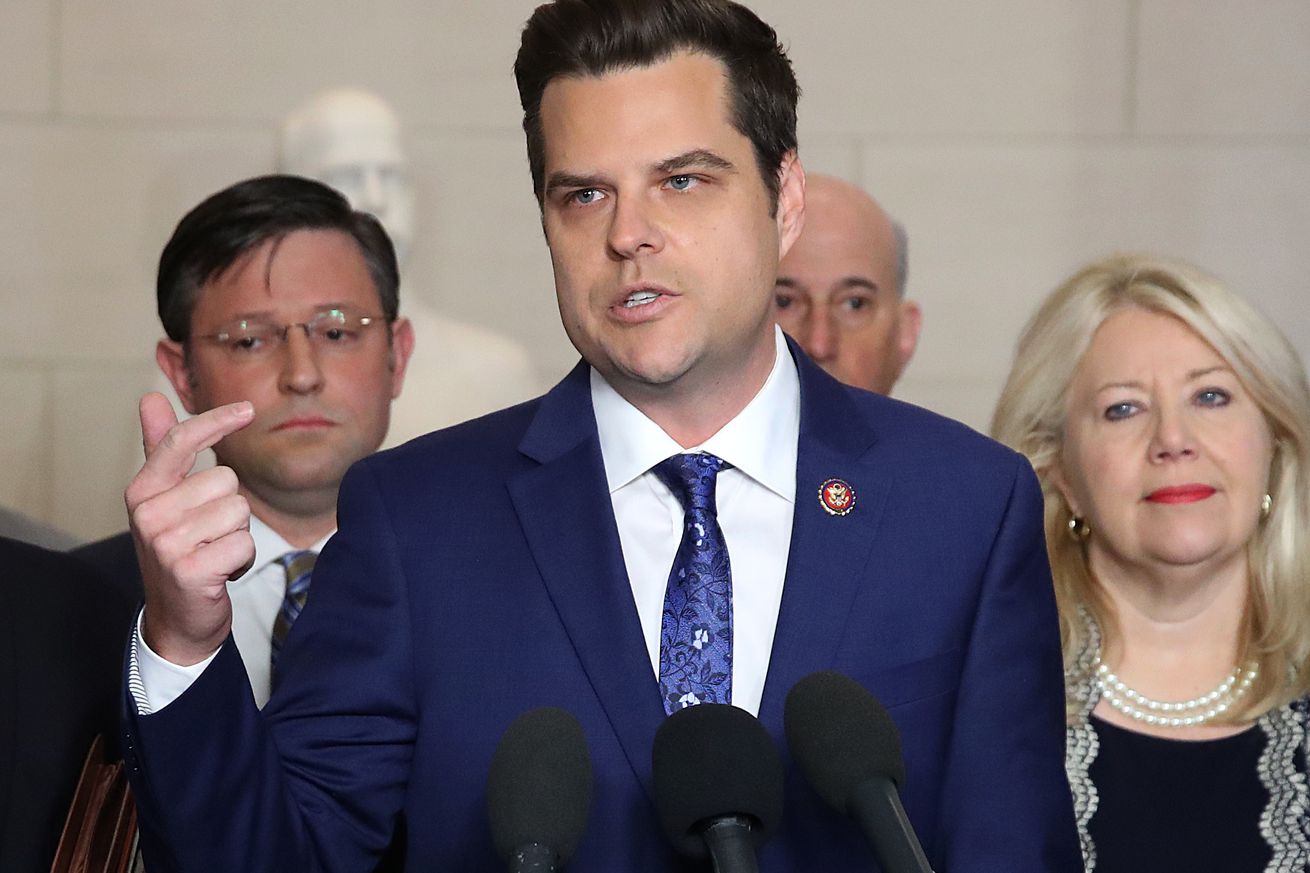 In a tweet published Monday, Gaetz wrote, “Now that we clearly see Antifa as terrorists, can we hunt them down like we do those in the Middle East?” The post was retweeted over 12,000 times before Twitter took action against it. Hours after it was posted, Twitter determined that it violated its policies against glorifying violence. In doing so, the tweet is hidden from Gaetz’s profile and users must click a “view” button before seeing. Likes, retweets, and replies are all disabled from the tweet in an effort to limit its reach.

Other lawmakers, like Sen. Chris Murphy (D-CT) called for Twitter to take down the tweet. “Take the Gaetz tweet down right now @twitter. RIGHT NOW. The survivors of mass shootings are lighting up my phone. They are scared to death this will inspire someone to start shooting into a crowd tonight. They are right,” he said. Gaetz responded to a tweet calling him out “for inciting violence,” by writing in a follow-up tweet, “You know what incites violence? Weakness.”

Over the last week, demonstrators have gathered in cities across the country to protest police brutality after the death of George Floyd, a black man who died at the hands of a former Minnesota police officer. Politicians like Gaetz and Trump quickly narrowed their focus onto instances of violence and looting, blaming left-leaning protestors and “Antifa” for riots.

On Sunday, President Donald Trump tweeted that the US will designate Antifa a terrorist organization. Under current law, the federal government has no legal authority to label a wholly domestic group in the same way it designates foreign terrorist organizations. Antifa, short for anti-fascist, isn’t an organized group — Antifa is often used as an adjective for activists who oppose fascism.

Twitter’s action against Gaetz’s tweet follows its decision to restrict and fact-check tweets from the president last week. On Tuesday, Twitter fact-check two tweets from Trump making false statements about mail-in voting and voter fraud. It was the first time the platform took action against the president’s post. On Friday, Twitter restricted a tweet from Trump for violating its policies against glorifying violence.

In Friday’s tweet, Trump called people protesting the death of George Floyd in Minnesota “thugs.” He continued, “Any difficulty and we will assume control, but, when the looting starts, the shooting starts.”

Shortly after the message was posted, Twitter determined the tweet violated its rules and placed a notice on the tweet. By doing so, the tweet was hidden from Trump’s timeline, and likes, retweets, and replies were disabled to limit its reach. Facebook declined to take similar action against the same messages posted by Trump’s account on its social network, leading to widespread frustration internally and Facebook employees’ first-ever organized walk out on Monday to protest CEO Mark Zuckerberg’s decision.

Only in the insane economics of Doordash could a restaurant get paid $24 for a pizza they ordinarily sell for $16.

If capitalism is driven by a search for profit, the food delivery business confuses the hell out of me. Every platform loses money. Restaurants feel like they’re getting screwed. Delivery drivers are poster children for gig economy problems. Customers get annoyed about delivery fees.

TimidWerewolf
reply
This is insane! If you order from DoorDash you should give this a read!

If you’re in the US, most PBS stations will be showing the documentary Worlds of Ursula K. Le Guin on August 2nd, so that’s your Friday night sorted.

Features interviews with the author, her family and friends, and the generation of sci-fi and fantasy writers she influenced, like Margaret Atwood, Neil Gaiman, and Michael Chabon, as well as gorgeous animations illustrating her work as she reads.

And this great thread by Jeet Heer, including:

Le Guin was part of a great shift in science fiction, often called New Wave, which had many dimensions (literary, countercultural, feminist) but was also a move from xenophobia to xenophilia.

I loved this from her Rant About “Technology” which, sadly, seems to have gone offline when that site was redesigned.

Technology is the active human interface with the material world.

… But the word is consistently misused to mean only the enormously complex and specialised technologies of the past few decades, supported by massive exploitation both of natural and human resources.

And of course this great acceptance speech when she received the National Book Foundation’s Medal for Distinguished Contribution to American Letters.

Watch - cheese infested with live maggots is a delicacy by Mark Frauenfelder
Friday January 4th, 2019 at 10:10 AM

Even though cheese is pretty disgusting when you think about what it is, most cultures enjoy eating the coagulated mammary secretions of hoofed animals. Even bleu cheese (which is little more that moldy fat) is considered good eating by a lot of people. But when it comes to cheese infested by maggots, most folks draw the line.

Not the residents of Sardinia. They go for casu marzu, a festering pile of rotten pecorino cheese teeming with squirming fly larvae. Stashed away in cupboards and under counters at open-air markets due to its contraband status, casu marzu is a cheese in which flies have been permitted — actually, encouraged — to deposit eggs. When the thousands of eggs hatch, the maggots eat the cheese and release an enzyme, triggering a fermentation process that causes the fat in the cheese to putrefy. By the time the cheese is ready to be consumed, it’s a gluey mass that creates a burning sensation in the mouth. Because the maggots will attempt to leap into the cheese eater’s eyes, conventional wisdom dictates that you should cover the cheese with your hand when you raise a piece it to your lips.

Squeamish casu marzu gourmands who don’t want to ingest live maggots can first place the cheese in a paper bag and seal it. When the maggots become starved for oxygen, they jump out of the cheese and writhe in the bag, making a pleasant pitter-patter sound.

When the sound subsides, that means the maggots are dead and the cheese is ready to eat.

A Sardinian government health department official who was interviewed by the Wall Street Journal said anyone caught selling or serving the black market treat could be slapped with a heavy fine, "but as a Sardinian and a man, let me tell you, I have never heard of anyone falling ill after eating this stuff. Sometimes, it tastes real good."

(Text from my book, World's Worst)